Home » Praying through a Pandemic

Praying through a Pandemic

This is what Leiden University student Farah replied to us when we reached out to her to ask whether she could share a bit about her religion with us. Faith is often seen as something very personal, but after asking around we found that most people are actually quite willing to talk about it if you approach them respectfully.

The pandemic has had an immense impact on all aspects of life. Religion, of course, is not an exception. With the celebration of Eid on May 13th, the holy month in Islam, Ramadan, has just come to an end. How did the one million Muslims in the Netherlands feel while practicing their religion during these unusual times?

To see how the pandemic affects the Islamic faith, we are first going back to the basics. The basic norms in the Islamic faith are the five pillars, which range from Shahada, acknowledging that Allah is the only god, to the Hajj: a pilgrimage to Mecca in Saudi Arabia. They all have been affected by Covid-19 in their own ways, our interviewees explain.

The first pillar is Shahada, or the profession of faith. By reciting the creed “There is no God but God and Muhammad is the Messenger of God,” Muslims express their full commitment to Allah and the religion.

Obaida considers it the most important pillar. “I think it’s the essence of Islam,” he says. “The rest of the pillars fall under it.”

Muslims believe God created the universe and continues to actively govern its affairs. This would mean that the emergence of the virus is an active creation of God. Some believe that the coronavirus was created by God to chastise humanity for consumerism, destruction of the environment and personal excesses

An interesting parallel can be made to Noah and the ark. This would mean that fighting the pandemic is futile and people should rely on God to protect the worthy and righteous, or in other terms, tawakkul. Especially members of the older generations believe vaccinations and wearing masks are unnecessary since God decides what their fate will be regardless.

Salem, a 75-year old Tunisian Muslim living in The Netherlands, also refuses to get vaccinated for this reason. When asked whether he is scared of the virus, he tells us that “the only one he fears is God.”

However, a large majority of Muslims counter this inevitable approach by arguing that while the emergence of the virus was not in human control, the spread of disease certainly is. They use this argument to encourage others to wear masks and vaccinate themselves

“We take every measure we can possibly take, and then we trust in God”

Obaida tells us about a particular story in the Quran, the holy book in Islam, where prophet Muhammad asks a man “Why don’t you tie down your camel?” The man answered, “I put my trust in Allah.” The Prophet then replied, “Tie your camel first, and then put your trust in Allah.”“We don’t leave our house open.” Obaida adds. “We don’t leave our cars open, no, we take every measure we can possibly take and then we trust in God.”

The second pillar in Islam is Salat or the duty of praying five times a day. Farah tells us that praying gives her comfort when she has no one to run to. The location of the prayer does not matter much to her. “I have only visited a mosque in The Hague once  because it is really far away,” she explains. “I usually only pray in my room.”

Women praying in the Mescidi Aksa mosque, during the lockdown. 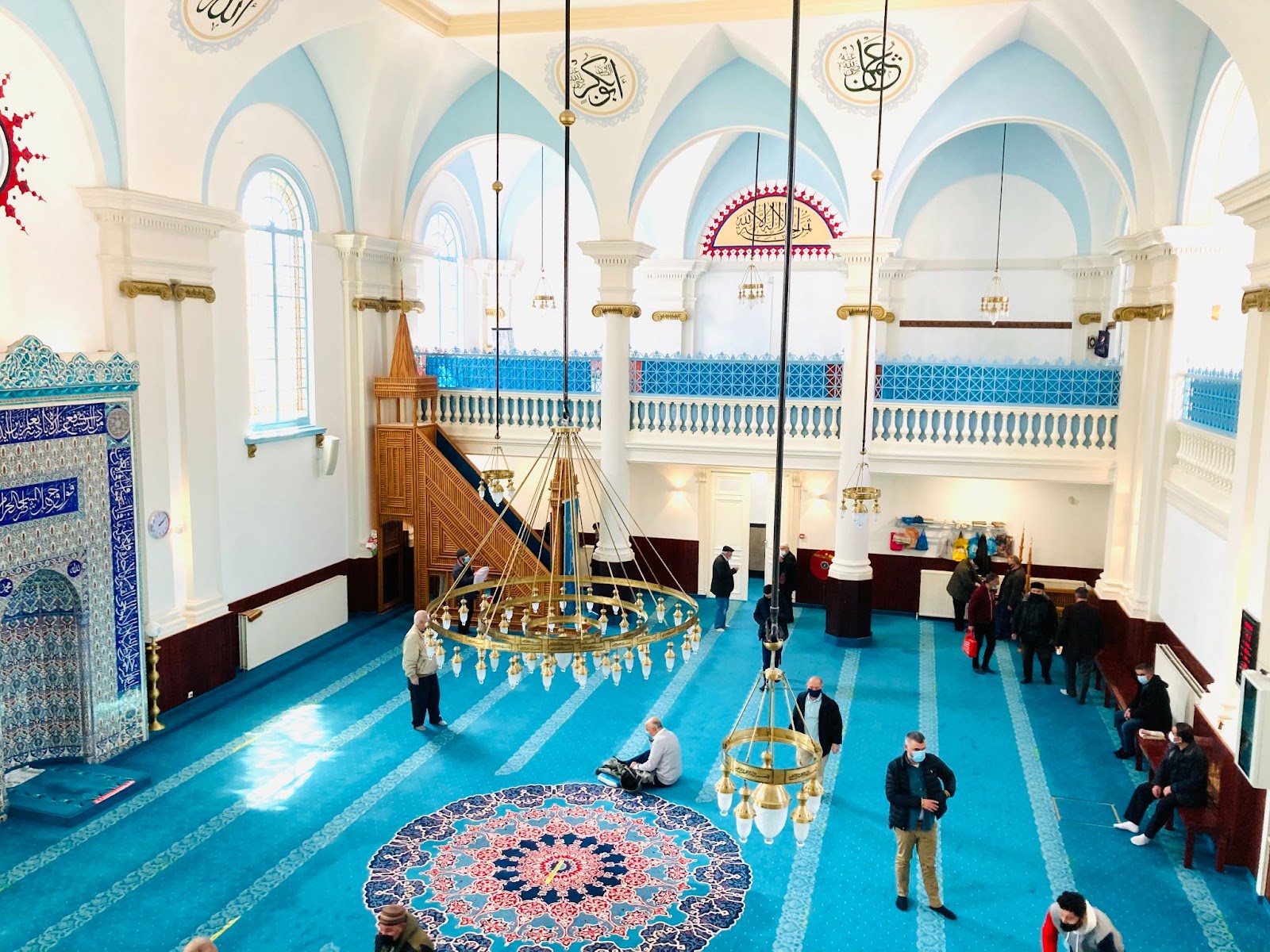 Others, like Obaida, do prefer to visit a place of worship. “The last time I visited a mosque was yesterday, actually,” he says. He went with a friend who was going through some personal problems. “By looking at the psychology in the Quran we found some teachings that we could use in our own lives and I think that’s very beautiful.”

Mosques around the Netherlands have taken measures to contain the spread of the virus. The Mescidi Aksa mosque in The Hague now requires people to wear masks, keep 1.5 meter distance, and do the ritual cleansing at home. Only a limited number of people are allowed to come inside the building during Friday prayers, which Obaida explains as the Islamic equivalent of Christian Sunday masses.

Obaida also points out that his praying experience has changed because of the pandemic. “It is ethical in a prayer to stand next to each other, as a symbol of brotherhood, but with the corona measures, we can’t do that anymore,” he shares.  “But the spiritual feeling is still there.”

Zakat is the third pillar of Islam, meaning a charitable act to those in need.  According to the Islamic law, Muslims who meet the necessary criteria of wealth are obliged to donate a fixed portion of their income. Zakat creates a bond and kinship in the Islamic community since it creates an opportunity of “giving” as well as interacting with people from different social classes.

Visiting the sick is also considered a good deed in Islam. In the case of COVID-19, such visits are not possible. Of course, checking up on those who are sick with phone calls, messages and social media is still possible and strongly encouraged.

Obaida admits that the pandemic took away the opportunity to give something to the needy physically. Yet, as a young student living in the digital era, Obaida does not see that the pandemic has largely affected zakat. “We can donate to homeless shelters and other organizations online”. During the pandemic, new ways have been found to collect and distribute zakat. Examples of these include the launch of the Zakat app, and Government COVID-19 relief campaigns. A majority of zakat administrations have also noticed an increase in donations.

Sawm, or fasting, takes place during Ramadan. Ramadan is in the ninth month of the Islamic calendar, as well as the month that the Quran was disclosed to the Islamic prophet Muhammad.

Ramadan lasts for 30 days. Eid al-Fitr, the Festival of Breaking the Fast, which is celebrated by Muslims across the world, marks the end of the month-long dawn-to-sunset fasting. Under the pandemic, Muslims have experienced Ramadan two times. The first took place between April 24th 2020 and May 23rd 2020. This year, Ramadan started on April 12th and ended on May 13th.

“My family is here so I have that benefit, but I do imagine it being hard for those who don’t”

Muslims often break the fast with their extended family and friends. Muslims have relatively large families. The Quran inspires Muslims to be generous to kin and treat the elderly with compassion. Not following this order is a major sin. Many Muslims feel conflicted about the need to apply social distancing on one hand and the need to be close to family and relatives for comfort and support on the other.

With the curfew in place for half of Ramadan and the maximum of one visitor per family, Muslims, like everyone else, are not allowed to visit extended family anymore. This promotes a strong moral dilemma to some. “It’s either alone or with the family,” Obaida explains. “My family is here so I have that benefit, but I do imagine it being hard for those who don’t.”

Salem knows what that is like. “It is lonely,” he tells us about Ramadan this year. He usually visits his family in Tunisia, but couldn’t now because of the traveling restrictions. Farah recognizes that. Being an international student, she does not have her family around during Ramadan. “That’s what I really miss, actually” she tells us. “I’m actually doing the fasting with a friend of mine, so that’s nice, but last year was really tough because I was doing it alone.”

Hajj is an annual Islamic pilgrimage to Mecca, Saudi Arabia, the holiest city for Muslims. It must be carried out at least once in a lifetime by all Muslims. A journey to the Kaaba, or house of God must be made in order to show Islamic solidarity and homage to Allah. There is a specific time frame for Hajj and this year it begins on the 17th of july and ends the 22nd.

The Hajj pilgrimage wasn’t  possible for a majority of the Muslim population this year due to the Covid outbreak. Since adults complete the journey mostly at a later stage in life, this deeply affected the elderly Islamic community. Last year, Saudi Arabia only allowed those living in the state to visit Mecca, thus excluding Muslims living abroad. Now of course, everyone was limited in their travelling, religious or not.

With the strict rules for this year’s Hajj, such as mandatory quarantine and vaccinations, a lot of Muslims will miss out on this journey once again.

Obaida, who experienced a smaller Hajj, called Umrah, tells us that Muslims were very scared in the beginning of the pandemic. Like Hajj, Umrah also includes a journey to Kaaba, yet unlike Hajj, it can be performed throughout the year. “People were shocked at seeing the empty Kaaba, without people. They didn’t know what was happening.” Now he feels that there is a feeling in the Muslim community that the situation will be better.

Touching upon the recent debate on Mecca only allowing those who have received the vaccination in, he believes that it will cause more Muslims to get vaccinated. “Otherwise people cannot go on pilgrimage.”

Some Muslim communities refuse to get vaccinated since there is pork gelatin in the vaccin. Obaida looks at this differently. “In Islam, the consumption of pork is prohibited. I personally think injection and consumption is different.”

All three of us are currently completing our bachelors at Leiden University! We all set out on this project not knowing much about both the Islamic faith and the impact of COVID-19 on faith perception, but found ourselves ultimately inspired throughout the journey. In listening to our friends and strangers alike sharing their experiences with faith and the pandemic, we aimed to frame this article in a way that would showcase all of the beautiful aspects of this religion not often known to those outside of it. At the same time, we wanted to share knowledge on an impact of the pandemic that is also not known to those that do not practice Islam.

Two sides of the same…

Shelters in two cities: an…

As Still as a Statue

The Personal Cost of Life…

A Method to the Madness

Changing the Face of the…

Sun: bringing joy to the…